Why are they putting holes in our greens?

If you’ve been down at the club in the past week you’ll have realised that our greens were hollow tined and sanded. You probably complained about having to putt on temporary greens or if you were fortunate to have missed that experience it’s likely that you blamed your three-putts (or four-putts) on the holey putting surface.  That’s a normal response but hollow tining is an essential part of most golf course maintenance programmes . I’m going to explain why…

So what is hollow tining?

It’s the physical removal of cores of turf from a playing surface. The holes are generally 13-16 mm in diameter and of varying depths depending on the reason for the tine. The cores are ejected, swept up and removed. They make excellent compost. When the process is completed, a smaller mass of soil will occupy the same area of green. 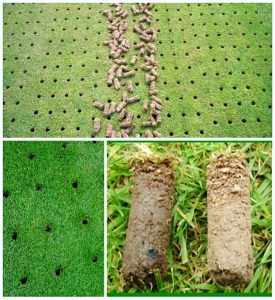 Why is it done?

Course traffic causes the ground to become compacted and hardened. This means drainage is less efficient and the grass’s roots are prevented from absorbing oxygen. Any biologist worth her salt knows that oxygen is essential for nitrifying bacteria which convert ammonia to nitrites and then nitrates which the plant roots absorb and use to make proteins… but I’ll not bore you with the nitrogen cycle!  Hollow tining allows the compacted turf to expand and air and moisture to be more easily absorbed.

The coring helps address the problem of thatch. (Thatch is a layer of grass stems, roots, and debris that settle and accumulate over time.) A thin layer is acceptable but too much thatch will hold water like a sponge.

Tining also removes accumulated fibre in the grass’s root zone. It allows for the exchange of a poor soil for a better one through top dressing. That’s why the greens are normally covered in sandy top dressing immediately after they’re cored.

In addition, coring allows for overseeding: another effective way of improving the quality of the playing surface.

When is it done?

Hollow tining is generally done outside the main playing season: often in early autumn. It’s important that the tining is completed before the weather turns wet and cold so there’s time for growth and for the holes to seal up. So the best time to hollow tine is late August / early September, but this coincides with the playing season at most clubs. It’s a difficult balancing act for greenkeepers. Some clubs will look to hollow tine very early in the spring season.

Is it a treatment for diseased greens?

It’s generally accepted that drier surfaces will be less susceptible to diseases like fusarium. As hollow tining is a good way of improving drainage it’s also a way of preventing the spread of disease.

Is it just for greens?

It’s a potential treatment for any turf suffering from compaction and the other conditions explained above. Many clubs hollow tine their tees and, if they have the manpower, some will even hollow tine the fairways.

What’s all the sand for?
Usually greenkeepers spread sand on the greens immediately after the cores have been removed and brush the sand into the holes.  This helps to improve drainage and aeration. 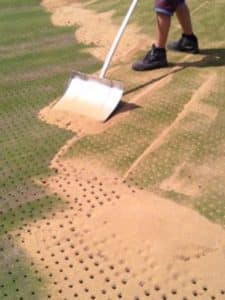 Hopefully members realise that a few days’ inconvenience is a small price to pay to ensure that the course remains in fantastic condition throughout the next year. You may have realised that I posted the same information this time last year.  I have re-posted it because it’s as relevant now as it was then.