What happens if my ball hits…?

With the introduction of “ready golf” in recent years combined with the new Rules of Golf in 2019, it’s easy to see why people get confused on the course from time to time, however there are some rules that everyone should know!

I was asked recently, “What happens if my golf ball hits someone else’s ball?”  Well, that depends on where it happened.

If your ball was on the putting green and your partner’s ball was also on the green, then you’ve fallen foul of the exception to Rule 11.1 and will pay a hefty price.

What happens next?  You must play your ball as it lies, counting the shot and adding two penalty strokes.  The player whose ball you hit is not penalised and he/she must replace the ball on its original spot.

So, if you are putting on the green and your ball hits another ball (also on the putting green), it’s your fault and you pay the price.  This is an avoidable situation however; if you think there is any chance that you might hit your playing partner’s ball you should ask him/her to mark the ball before you putt.  It’s your responsibility to do this.  If they’re not willing, you can require them to do so – using Rule 15.3b – if, given the intended stroke, there is a ‘reasonable chance the player’s ball in motion could hit that ball’. In stroke play, the player required to lift or mark has the option to play first.

What happens if I hit someone else’s ball on the putting green after I chip on?

Well, since you weren’t on the green to begin with there is no penalty to either player.  You play your ball as it lies and your partner must replace his/her ball on its original spot.

What happens if my ball hits someone else’s stationary ball on the fairway or rough?

There is no penalty.  You play your ball as it lies and your playing partner should replace his/her ball on its original spot, or estimated position if the exact spot is unknown.

With “ready golf” these days there is the risk that two players could inadvertently hit their shots simultaneously.  What happens if their balls collide? If it’s on the putting green, exception 2 to Rule 11.1 explains that the stroke doesn’t count and it must be replayed – by both players:

Exception 2 – When Ball Played from Putting Green Accidentally Hits Any Person, Animal or Movable Obstruction (Including Another Ball in Motion) on Putting Green: The stroke does not count and the original ball or another ball must be replaced on its original spot (which if not known must be estimated) (see Rule 14.2).

As far as I’m aware, these rules have been in place for many years – they’re not “new” rules introduced in 2019.

One welcome change brought about in 2019 was that there isn’t a penalty if your ball accidentally hits you or your equipment. 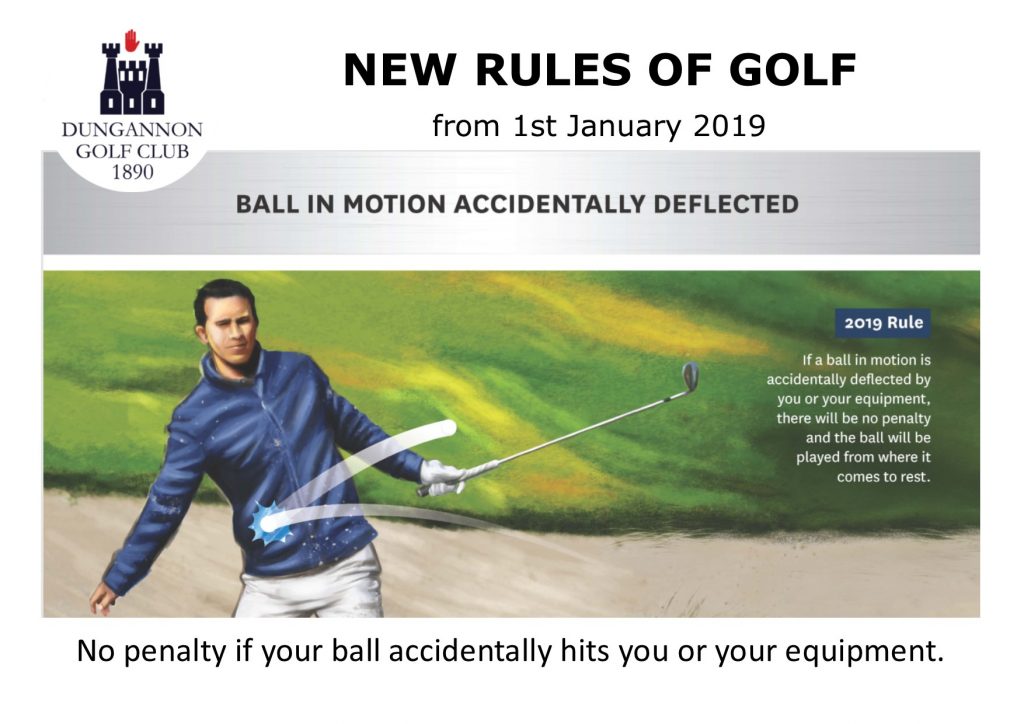