Use the rules to your advantage

On Thursday my approach shot onto the third ran off the back of the green and when I went over to investigate I realised there was a sprinkler head in-between my ball and the green.  My initial thought was to try a chip-and-run shot, but I reckoned that I needed to land the ball in the vicinity of the sprinkler head, so I ended up trying something different… with little success!  At the back of my mind I was aware that some clubs have a local rule about relief from such obstructions but I reckoned my ball was too far away to warrant me taking the time to check this out.  It was only when I mentioned the sprinkler head in conversation as we left the green that my friend said, “Oh – that was covered in Tuesday’s Rules Night” (she’s a member of two golf clubs.. it was her “other” club).  “If the sprinkler head had been within two club-lengths of the green and your ball was within two club-lengths of the sprinkler head you could have had a free drop“.  To be honest, I think my ball might have been too far away, but I was cross with myself for not bothering to check!  It wouldn’t have made much difference… I was nowhere near the winners’ enclosure anyway!

Rule 16 deals with immovable obstructions such as sprinkler heads, however this rule wouldn’t have allowed me to take free relief:

This Rule covers free relief that is allowed from interference by animal holes, ground under repair, immovable obstructions or temporary water.

When Relief Is Allowed

If the abnormal course condition is close enough to distract the player but does not meet any of these requirements, there is no interference under this Rule.

The last sentence describes my situation – basically, although the sprinkler head is in the way I wouldn’t have qualified for free relief, since my ball wasn’t touching it nor was my stance or swing affected.

many clubs (including my own) have a local rule that deals with sprinkler heads.  Have a look at no. 3 below: 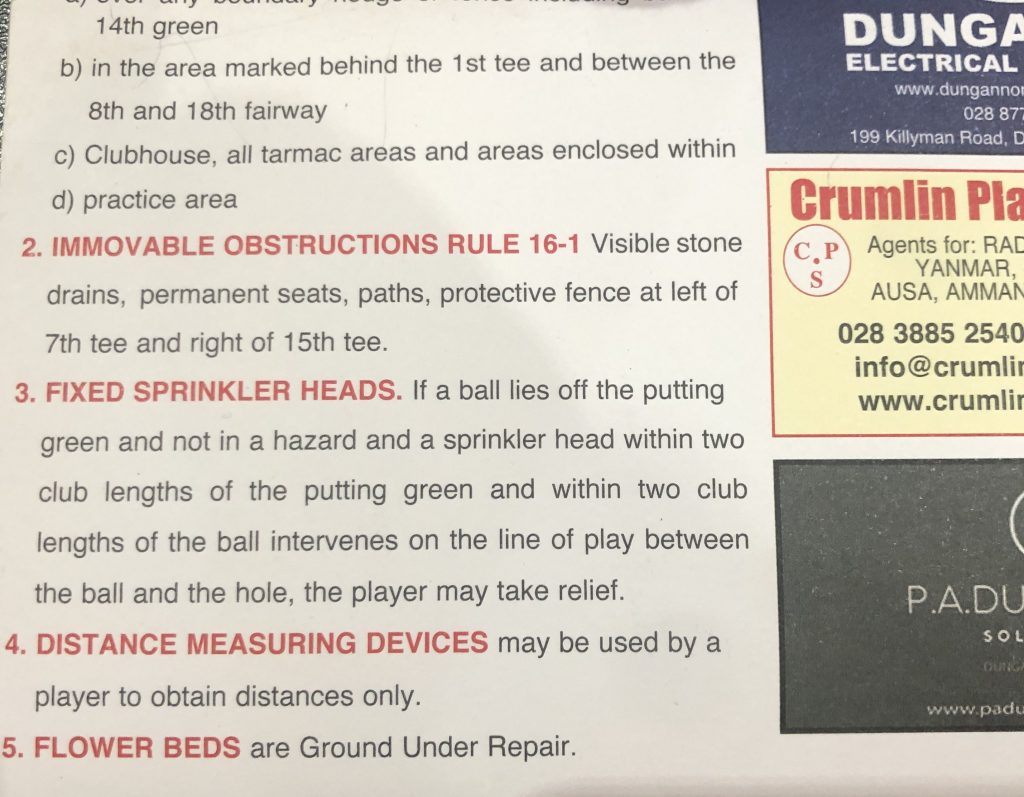 So, if you end up in the same situation as me, make sure you check the local rules to see if you are eligible for free relief – not all clubs have this local rule!

Some golfers are very knowledgeable and when a rules issue arises on the course they are very helpful, however others “sound” very knowledgeable!!!  I remember having a discussion many years ago with a playing partner when another golfer was allowed free relief in the rough – I can’t remember the exact reason, it may have been near a staked tree.  When she measured her area of relief it took her onto the fairway, but I can distinctly remember the other member of the group telling her that she had to drop in the rough because that’s where her ball had originally landed.  I voiced my opinion that she could drop on the fairway if she wished, however I was over-ruled.  I had only been playing for a short time so I didn’t argue, but I was determined to find out who was right and who was wrong!  I felt vindicated when, at a “Rules Night” in our club, a visiting rules official explained that you just have to drop your ball in the relief area – it doesn’t matter whether it’s in the rough or the fairway.  Rule 16.1/1 states:

Relief from Abnormal Course Condition May Result in Better or Worse Conditions
If a player receives a better lie, area of intended swing or line of play in taking relief under Rule 16.1, this is the player’s good fortune. There is nothing in Rule 16.1 that requires him or her to maintain identical conditions after relief is taken.  For example, in taking relief from a sprinkler head (immovable obstruction) in the rough, the player’s nearest point of complete relief or relief area may be located in the fairway. If this results in the player being able to drop a ball in the fairway, this is allowed.  In some situations, the conditions may be less advantageous to the player after relief is taken as compared with the conditions before relief is taken, such as when the nearest point of complete relief or relief area is in an area of rocks.