Tom Dickson – Golfing for over 90 years

This week I have a story of a record-breaker, Mr Tom Dickson!  When I started to read about the history of his family in connection with Dungannon Golf Club I discovered many interesting facts which are worth sharing.

Here’s a video that Tom’s mother took with a cine camera in 1931 of her three sons golfing.  Tom is the first one to drive and is in a dark jersey over a dark shirt.  Stephen is the little one in white and John is wearing a dark jersey and white shirt.  Tom is the only one who knows what he is doing!

Tom Dickson was born into a family with a rich golfing heritage.  His grandfather, James (pictured right), was a founding member of the Club in 1890 when it was just nine holes and located in Dungannon Park (probably a convenient walk from his home in Milltown).  He was Captain in 1896 and 1901 and President from 1933 until 1941 and held other posts of responsibility in the Club.  He represented Dungannon GC at an historic meeting in Belfast to establish the Golfing Union of Ireland, the world’s oldest golfing union.

The best golfer in the family at that time, though, was another Thomas Dickson (Tom’s great uncle), who was a member of Dungannon and Royal County Down. He won the first Irish Close Championship at Portrush in 1893 (he was also runner up in 1894), he was responsible for the building of the nine-hole course at Banbridge, and his red golf jacket is a feature of the display of golf memorabilia at Royal County Down today.

Tom’s uncle, W T Dickson, was Captain in 1910, prior to setting off to fight in The Great War where, unfortunately, he was killed in 1916.  Tom’s father, Major TCH Dickson, was one of the first trustees of the club. He was Captain in 1912 and served as President for an impressively long stint, from 1941 until 1963. 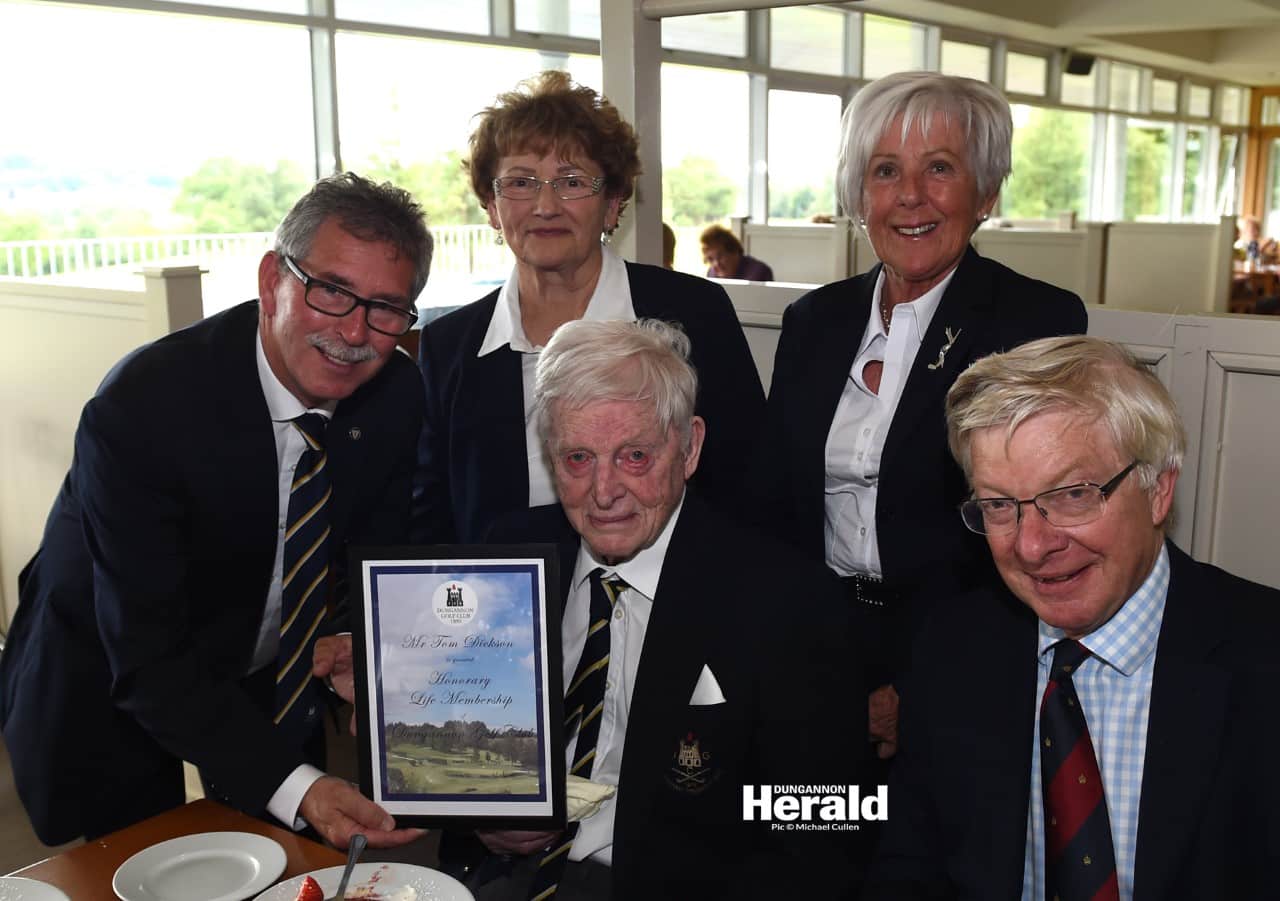 Last week Hononary Life Membership of Dungannon Golf Club was conferred upon Tom Dickson and his son, Tim, spoke at the presentation, saying, “This Thomas, my father, has certainly been an excellent golfer and an opponent that anyone here would have been happy to take the money off! His lowest handicap, I think, was six and while he was not what would now be called a pot hunter these days he won the Tyrone Cup and was runner up in the Aughnacloy Putter.”

“Dad, incidentally, was Captain of Dungannon’s Towns Cup team when a young Darren Clarke first emerged on the scene and he was convinced, long before anyone else said it, that Darren could be a champion one day. “

“Nothing has given Dad more pleasure over the years than playing his regular Saturday and midweek fourballs at Dungannon with friends – the likes of Dr Tommy Campbell, Noel Madden and Colin Stevenson – or simply popping out for a few holes with my mother Rosemary – a former captain and Lady President in the days when we had Lady Presidents! He taught me how to play on the course when there were only nine holes – and a family visit to Dungannon for me over the years was never complete without a round with him here.” 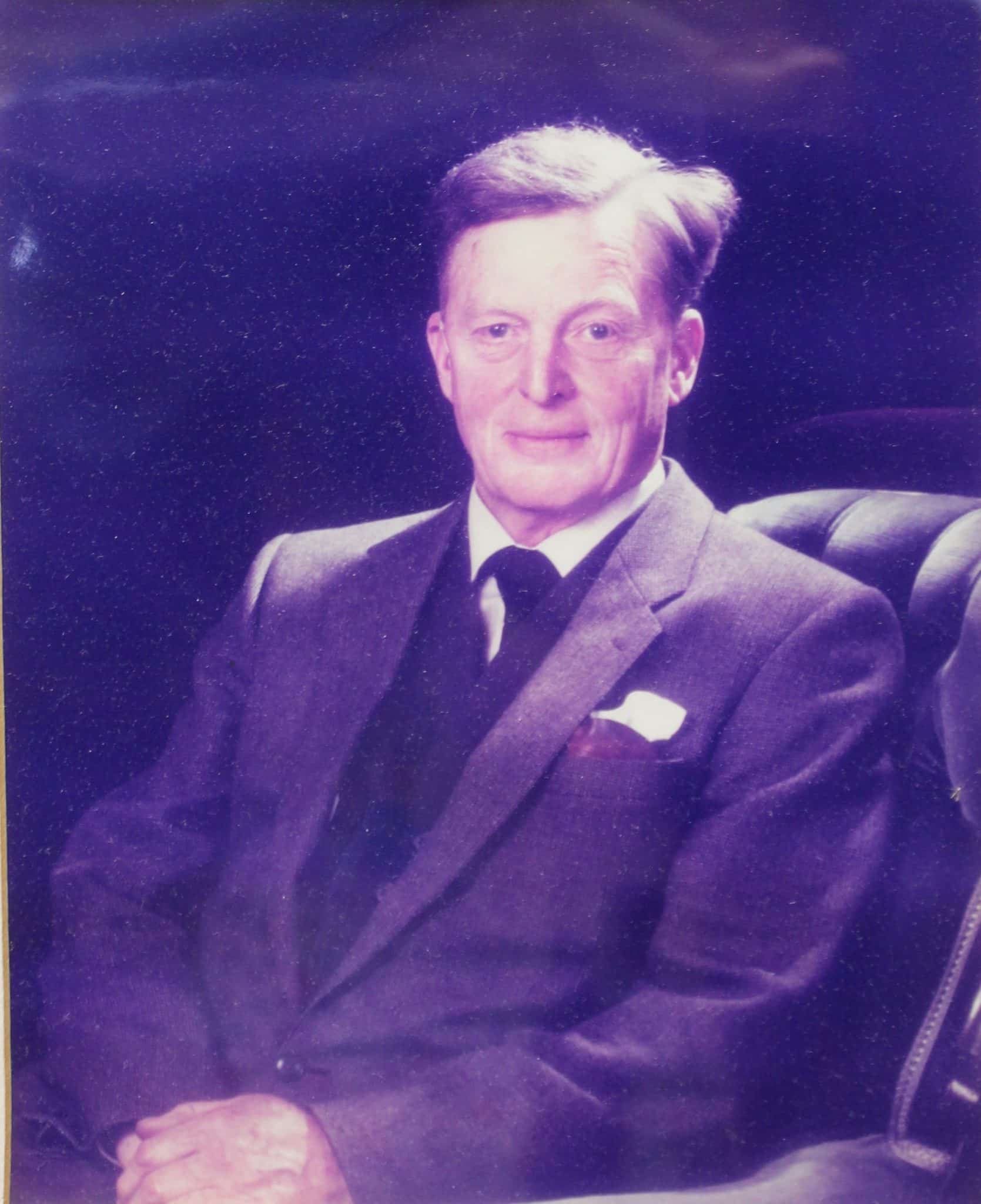 Tom served as Captain in 1959 and as President from 1979 until 1983 and also in the centenary year, 1990.  He was a Trustee for over 40 years and was a member of the winning Roberts Cup Team in 1965, whilst his late wife, Rosemary, was Lady Captain in 1958 and Lady President from 1980 – 1983.  Rosemary was also the first lady to become a Full Member in both Dungannon and Royal Portrush.  Over the years the Dickson family has held the position of President or Lady President for over 40 of the Club’s 128 years in existence – this is a unique achievement and commitment.

His younger son, Tim, has been a member of Dungannon for over 50 years and, now living in England, has been captain of Royal Wimbledon GC and will be Captain of Royal St George’s GC next year when it hosts The Open.  Incidentally, this was the scene of our own Darren Clarke’s Major victory.

Golf has certainly given the Dickson family much enjoyment and there are many reported links between golf and good health.  Researchers from the University of Edinburgh recently published a study in the British Journal of Sports Medicine which stated that playing golf is likely to increase life expectancy, help prevent chronic diseases and improve mental health.    The researchers found that golf is likely to improve cardiovascular, respiratory and metabolic health, as well as helping sufferers of chronic diseases such as type 2 diabetes, heart disease and strokes.  What’s more, the physical benefits of golf increase with age, and balance and muscle endurance in older people are also improved by playing the sport.  Golf can be a great social activity and provides mental well-being benefits.

If you want to get into golf click here to find out about our free taster sessions and starter lesson packages.  There’s even the chance to win a £250 membership voucher! 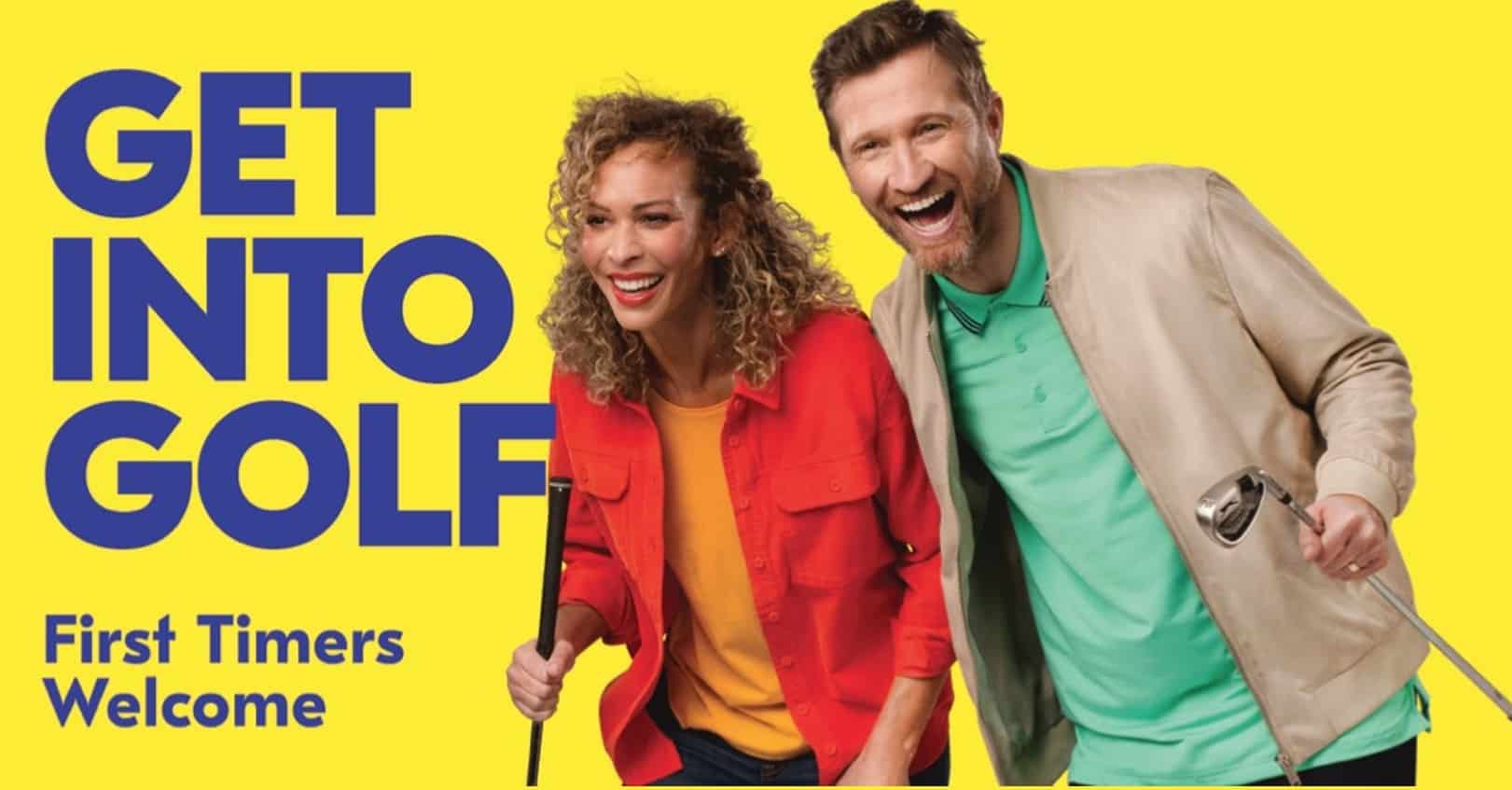