Despite the very best efforts of golfers, coaches and equipment manufacturers, golf remains essentially a game of failure. Even Ben Hogan, perhaps the finest ball-striker the game has known, described golf as ‘a game of misses’. Yet, there is the odd success sprinkled in there somewhere… but the seasoned player doesn’t need reminding of how many ways there are to screw it up.

Karl Morris*, who has written many books about the “mind factor” in golf, believes that failure on the golf course is the key to success. However, whilst we all know about failure, we are not as aware of the damage it can do to us. Continual disappointments can decimate our confidence, cause us to lose our focus and even ruin our enjoyment of the game. That is why golfers, like no other sports players, need an effective coping mechanism to deal with the times it doesn’t go well.

What is failure?  Not living up to your expectations
Morris explains that we are consistently exposed to situations that raise our expectations. We hit a series of shots on a flat, hazard-free, consequence-free range, find a nice rhythm and see an exciting potential in ourselves; we watch the golf on TV and observe golfers bombing pins and draining putts – never mind that we only ever see the best players in the world on their hottest weeks; and even on a day-to-day basis, a good round today makes us feel there is no reason at all why we should not be able to replicate our form tomorrow.  These experiences continually raise our expectations… and when our expectations are raised, the opportunity to ‘fail’ is raised with them. It stands to reason that if you can go out on to the course armed with more realistic expectations, you will go a long way to banishing the negative effects of failure. 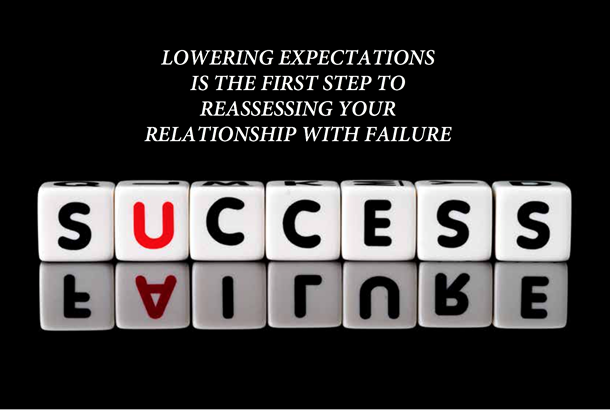 So what are more realistic expectations? Well  first, let’s look at the act of hitting a golf ball… moving the club around you through 13ft of air at great speed to hit a small ball, in the full knowledge that just a couple of degrees’ difference in the clubface angle could send it into the water/bunker/trees! Seen in this light, a successful shot seems much less of a guarantee.

Then there is the golfing environment, a dynamic and chaotic world of changing atmospheres, ground conditions, slopes and situations. Compare this to the consistent, controlled environments of running tracks, snooker tables, velodromes and the like and you start to see why a golf course is perhaps the last arena where its contestants should be expecting a certain level of performance.

Then, there is the way we are built. Humans are wired for adaptability, not repeatability, and that makes consistent movement against our nature.

Morris says all this not to dent your confidence but in an attempt to demonstrate why, when it comes to expectation, we would do well to reign ourselves in. Lowering expectations doesn’t mean not trying your hardest, or assuming things will go wrong; it simply means heading out to the course full of confidence, but armed with the acceptance that in an unpredictable game, you might well have a period when things don’t go as you expected or hoped. He often tells the players he works with “Expect nothing, deal with everything.” Not a bad rule to play your golf by.

He once asked former Ryder Cup player and captain Mark James how he dealt with pressure on short putts.

“I expect to miss them,” James replied. “Then the pressure goes away.”

That doesn’t mean he’s not doing everything in his power to hole the putt; it simply means that if the putt misses, he’s in the best possible state to accept it. Failing isn’t the problem; it’s your interpretation of the failure that does the damage.

Lowering expectations is the first step to reassessing your relationship with failure. But you can also consider these two factors. They will both help you develop a healthier attitude to it.

“I should have holed that”… “I should be beating this guy”… “This should be an easy par”… all examples of using a word that links directly to expectation. There are no “shoulds” in such a random, illogical and unfair game as golf, so remind yourself of that the next time you are tempted to use the word.

No not Spieth. Michael. The greatest basketball player in history once said: “I’ve missed more than 9,000 shots in my career. I’ve lost almost 300 games. Twenty-six times I’ve been trusted to take the game winning shot and missed. I’ve failed over and over and over again in my life. And that is why I succeed.”

Jordan regarded failure as an intrinsic part of success – and indeed, if you read biographies of any major sporting figure, you will see how a learned acceptance of failure played a key role in their development.

* Dr Karl Morris is one of Europe’s leading Mind Coaches, delivering cutting edge methods of peak performance and goal achievement to a range of clients across sports and business.  From the world of golf, he has worked with players such as Darren Clarke, David Howell, Lee Westwood, Paul McGinley, Graeme McDowell, Richard Finch, Phil Archer Alison Nicholas and Trish Johnson.