After several days of glorious sunshine it was disappointing that our first Revive Active team match was played in wet and cold conditions on Saturday.  It rained for all 18 holes (yes – we were all square coming off the 17th and then we tied the 18th… and were getting mentally prepared to go down the 1st once again when we got the news that Dungannon had already won enough matches to progress to the next round!)  Four ball better ball match play can be slow, and Saturday’s matches were just that!  I suppose the rain made things a little more difficult and one of our opponents’ trolleys gave up, but there were also a few free drops that took up time!

My playing partner’s ball came to rest on a gravel path and therefore she was entitled to relief.  Now, my playing partner has an excellent knowledge and understanding of the Rules of Golf so she knew exactly what to do, but it took a bit of time to explain the process to our opponents who were, understandably, keeping an eye on our movements.

Some people assume that you simply decide which side of the path your ball is nearer to and drop off that side.  That is often the nearest point of relief, but not always!  Whether you are right handed or left handed will make a difference in some cases too.  At last week’s “Rules of Golf Evening”  we were talked through the following steps:

If it’s not clear which side to drop off, you should repeat the above steps on the other side and then decide which reference point is closer to your actual ball on the path.

P1 below shows the relief area for a right-handed golfer whose ball comes to rest at B1.  The second example (B2 and P2), makes it clear that the reference point is the position of your ball after you have taken complete relief from the path, in other words, you are no longer standing on the path, and you’ve got a club length outwards from there. 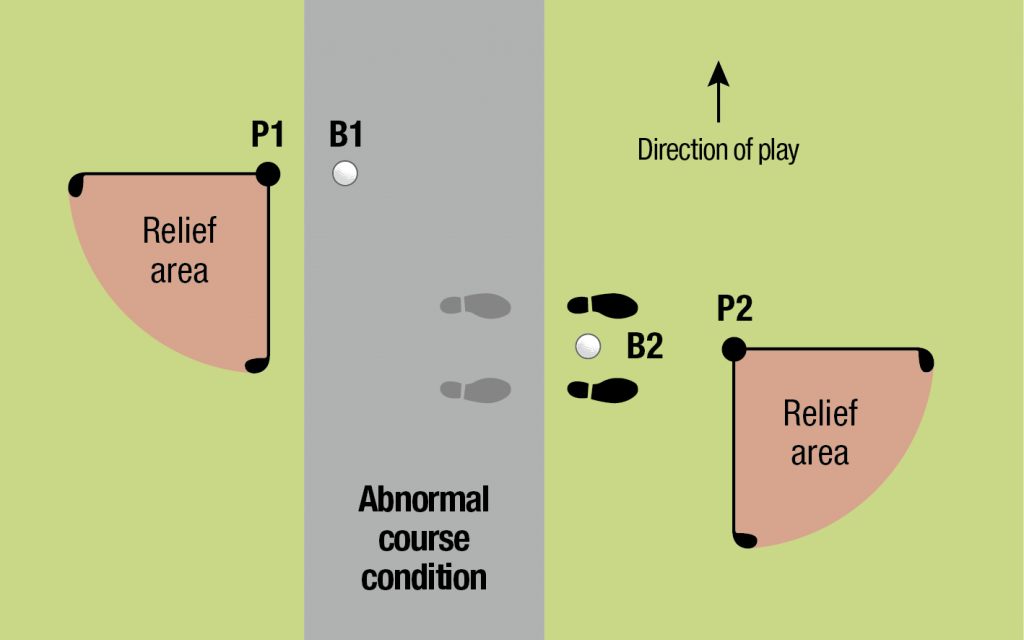 The next diagram shows that the left-handed (blue) golfer’s relief area is to the right, even though the ball landed closer to the left side of the path.

Our opponents also landed on paths, so we went through this procedure several times and on one occasion the steep Monaghan hills meant that the ball rolled nearer the hole after it was dropped.  Fortunately our opponent knew the rules well and when it rolled after the second drop she promptly picked it up and placed it where it first hit the ground.

Here’s a video which addresses free relief from paths.  Remembers, it’s the NEAREST point of relief, not the nicest!!!