I wasn’t playing golf at my usual time on Saturday morning as I had to work, however I couldn’t help but notice the frost as I left the house.  A quick glance at my phone confirmed my fear that the Saturday morning golfers would be affected – temporary greens were in play.  By the time I was teeing off several hours later the greens had reopened, thankfully – I find it hard enough to putt on closely mown greens!  Course convenors and green keepers around the county complain that some members have been known to venture onto frozen or frosted greens – they don’t like playing on temporary greens so they just play the game as usual!  I hope that no one at my own club would be so selfish!  No one likes playing on temporary greens – everyone would prefer to play on the usual greens, but most members know that the frozen greens have been closed in order to protect them!

What happens to grass during a frost?

Frost is formed when cool air causes water vapour to condense and form droplets that then freeze on the ground.  Grass is a plant (I’m stating the obvious here!) and like all plants it’s subject to stresses and strains. The less stress a plant is under during the winter months, then the healthier it should be when temperatures start to rise in the spring.

When temperatures drop below freezing point the water inside the cells expands and exerts pressure on the cell membranes.  The low temperature also destabilises lipids in the membranes, causing them to become dysfunctional.  Ok – that’s the science bit over.   When golfers walk across frozen grass, particularly greens, the compaction can cause “bruising” underfoot. Cell walls and cell membranes are damaged and the plant is killed from the inside.  As the temperature then rises the dead grass turns brown and wastes away. 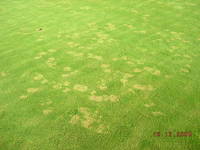 This kind of damage can last well into the spring – until temperatures really start to rise again and growing resumes.

I came across this on social media during the week: 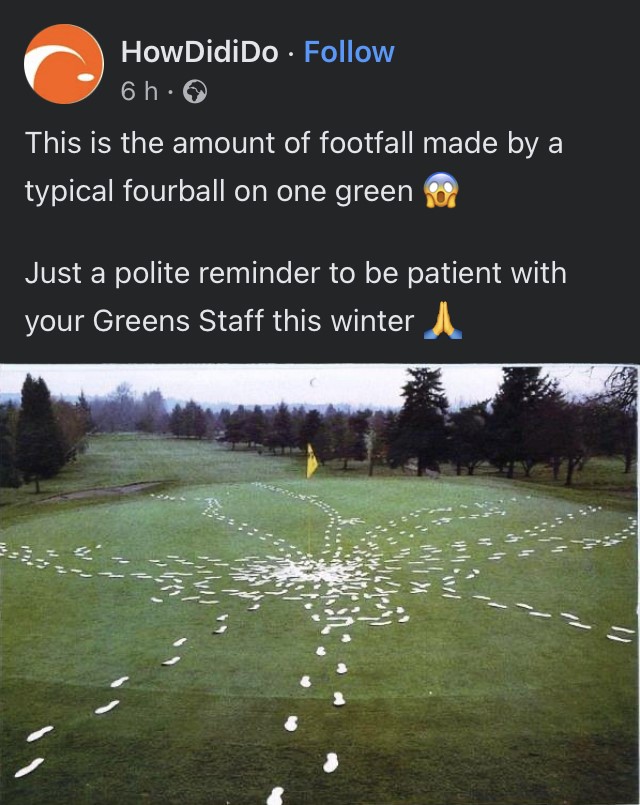 Just imagine the amount of damage that one four ball could do to a frozen green!

Our green keepers work incredibly hard to keep our course in such good condition – don’t make their job harder!