It never rains but it pours

It’s only mid-October but the ‘course closed’ signs have already been out on numerous courses around the Province. Surely a little bit of rain shouldn’t cause too much hassle?  Well, the folks at National Club Golfer spoke to Lee Strutt, master greenkeeper and course manager at the The Royal Automobile Club, and Sam Bethell, course manager at Chipstead, both in Surrey, to get expert views on how rain affects golf courses.

We think grass grows in soil. Well, it does… and it doesn’t. The roots actually grow in air spaces between soil particles.  These air spaces are vital – as a biologist I could go on about their importance for nitrogen-fixing and nitrifying bacteria but I can tell you’re not interested in that!  Common sense tells us that when it rains these air spaces begin to fill up with water.  If there’s only a little rain the water will drain away, eventually reaching streams and rivers, but if the rain is heavy, or if it’s been raining earlier, the water can’t drain away quickly enough and these air spaces get filled up.  If we start walking on these soils when they are saturated then a lot of those little pockets get closed up and water can’t move through as easily and it takes a lot longer to dry out.

Strutt explained, “If you walk on it, and it’s wet from the top down, you just compact it and push the grass into the soil. You are crushing the area where the roots are. All those spaces for air and water are being compacted and squashed. That’s why the water comes up around your feet.”

It will stop pouring, eventually. But, if a course has had heavy play, the damage won’t be repaired any time soon.  “It’s very similar to frost,” explains Bethell, whose course had seen close to four inches of rain in October before the skies opened again last week.  “You could walk out on a golf course and see there’s no frost. It could be frozen, though, but you can’t see it.  Rain is the same. It will start drying out from the top but it doesn’t mean that a couple of inches under it isn’t still soaking wet.

Strutt adds: “We might start seeing some deterioration in the playing surface, and the time we really want the plant to perform well – the following summer – all the damage within the soil might take several months to recover and require remedial action and additional works to put right.  We’re six months away from where we hit warm growing weather again. Any damage or issues we have now, we are not going to really have recovery until next April or May.”

No sooner do we get over one big downpour, another follows right behind.

So here’s what happens to our courses if October continues into a wet winter.

“It’s a greenkeeper’s worst nightmare,” admits Strutt. “Wet warm winters and increased disease activity equals more cost, greater deterioration of surfaces through continued wet periods and, effectively, gains made in the summer would be lost for the following season.”

Says Bethell: “We can’t stop nature. We can’t change the weather and we can’t stop it raining, but we can stop people and we can stop buggies and trolleys. That is something we can control. That’s why you’ll get a lot of roped off areas. It’s horrible to look at but, without that, it would be absolute carnage.”

So, that’s why most courses ban buggies and ride-on carts and some prevent the use of motorised trolleys too.  If you’re able to you should really carry your clubs, if you want to protect your course from damage during the wet winter months. 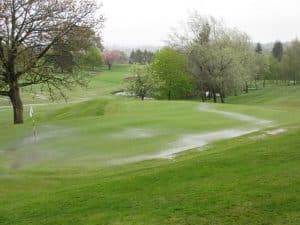