In case you missed it amongst the 6 Nations hype and Winter Olympics at the weekend, Ireland’s Leona Maguire has written her name in the history books by becoming the first Irish golfer to win on the LPGA Tour!

Dreamt about this moment for a long time and we’re only getting started ??? Couldn’t have done it without the help of my incredible team & family ? #canseecanbe pic.twitter.com/pYR4Hdfpdh

Playing in the LPGA “Drive On Championship” at the Crown Colony Golf and Country Club in Florida, Leona shot six birdies in the third and final round on Saturday to finish with 67, ending with an 18-under total, to win by three shots ahead of Lexi Thompson.  What a great boost for golf in Ireland – what a great role model for women and girls!!!

Although Leona Maguire’s talent has been well-renowned in Ireland for many years, it’s only recently that the world’s media has taken note and that is surprising as her list of prior achievements is outstanding.

At the age of nine, Leona and her twin sister, Lisa, gave up promising swimming careers to concentrate on golf.   Leona played her first amateur competition at Castle Hume Golf Club, Enniskillen, on 17th March 2005 when she was ten, playing off a handicap of 36.  By September she’d been cut to 14 and had won the HSBC British Wee Wonders Championship by 11 shots at St Andrews with a finishing round of 61.  She’s got a list of remarkable achievements as long as your arm, but the ones that stand out in her early career are:

During her time playing USA College golf for Duke University, she broke many records and collected numerous titles and awards, including:

In 2018 she broke Lydia Ko’s record for the most weeks at the top of the World Amateur rankings  – she eventually held the No 1 spot for 135 weeks before turning professional.  SInce then she has risen steadily up the World Golf Rankings, managing to stay under the radar until 2021 when she finished the year in 43rd place.  Some noteable performances in the professional arena:

It was no wonder that Catriona Matthew chose her as one of her Captain’s Picks for the Solheim Cup team.  She went from rookie to Europe’s most feared player with a record-breaking performance.  As Europe claimed only its second away win, the girl from County Cavan became the most successful rookie in Solheim Cup history, accumulating four-and-a-half points out of five – she was undefeated! She was also only the third player in Solheim Cup history to earn her team more than four points in a single competition.

So, at the age of 27, people were starting to ask Leona when she was going to start winning on the LPGA tour.  Maguire responded, “Lydia (Ko) said last week, ‘If you knock on the door enough times eventually it’ll open.  I’m adopting that same mentality, putting myself in these positions. Put a lot of work in over the offseason too, and it’s nice that it’s paying off this early in the season. If it does, great. If not, no big deal. We’ve still got a long year ahead of us.” Well, she certainly put herself in the right position this weekend!

And on that note I’ll finish with a photo I got when I bumped into the two sisters watching Team Europe beat Team USA to lift the Solheim Cup at Killeen Castle in 2011 – they’d just finished playing in the PING Junior Solheim Cup at Knightsbrook in Meath days earlier, having held the USA team to a draw.  Somehow I don’t think they treasure this photo as much as I do!!! 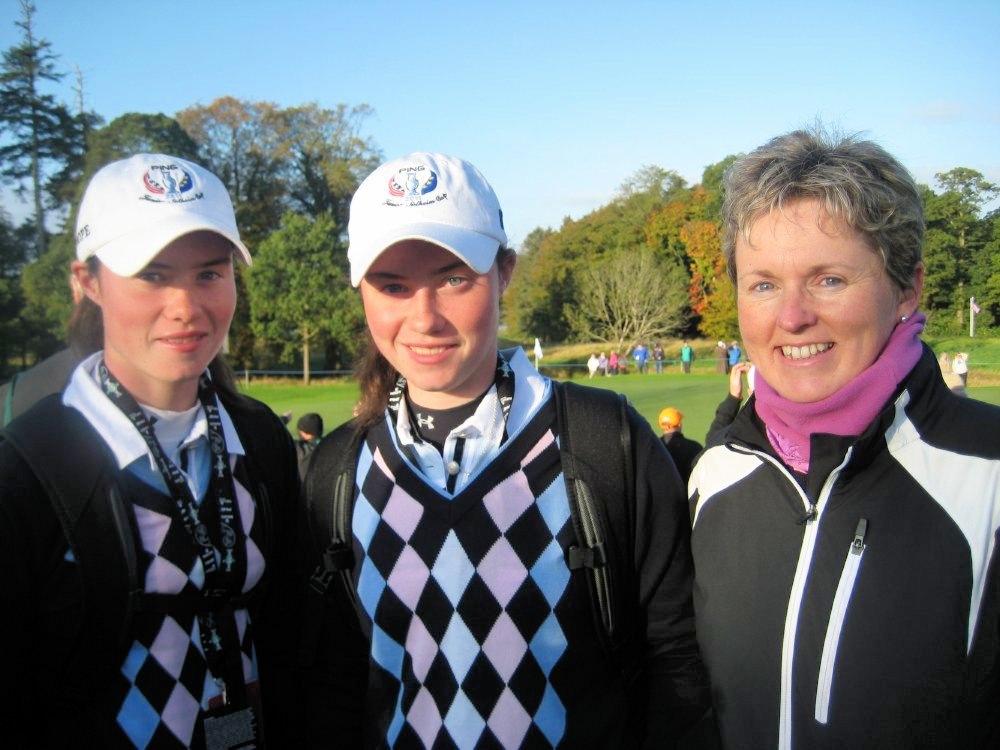