Greens as fast as Royal Portrush’s

We all talk about the speed of the greens, whether that’s because they were so fast and we putted three or four feet past the hole, or perhaps they were so slow that our ball never got near the hole, or maybe some were fast and some were slow, so we never got the measure of them!  You’ve heard commentators talk about greens “reading 9” or other such numbers, but what do these numbers mean?

In 1935 golfer Edward Stimpson (the Massachusetts State Amateur Champion) was a spectator at the U.S. Open at Oakmont near Pittsburg, where the winning score was 299 (+11).  After witnessing a putt by top professional Gene Sarazen roll off a green, Stimpson was convinced the greens were unreasonably fast, but wondered how he could prove it. He developed a simple device which was a 3 foot wooden ramp barely 2 inches wide with a V-shaped groove. He placed a golf ball at the notch and raised the ramp slowly until it was 20° from the ground.  The ball began to roll down the ramp and onto the green.  Stimpson then measured the distance (in feet) that the ball rolled along the surface of the green.  He suggested to the USGA that they use this device to monitor the speed of their greens with the aim of keeping them at sensible speeds.  This device is now known as the Stimpmeter. 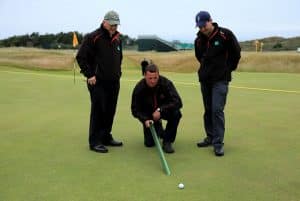 How does it work?

The larger the distance it travels, the faster the greens are.

The USGA categorises greens based on the following figures:

As you would imagine for US Opens they recommend faster speeds:

Dungannon’s greens are running about 10 feet on the Stimpmeter at the moment, in other words they have a Stimp Rating of 10.  That’s pretty fast, in fact it’s the same speed that the R&A set for The Open Championship, so it’s fair to say that the greens of Dungannon Golf Club are of a similar standard to those of Royal Portrush Golf Club!

So, if you want to play on greens as good as the ones Rory, Graeme, Darren and Tiger will be competing on, pay a visit to Dungannon Golf Club – you’ll not be disappointed!

One problem when measuring the speed of greens is finding a near level surface as required in the USGA handbook. Many greens cannot be correctly measured as there may not be an area where the measured distance or green speed in opposing directions is less than a foot, particularly when they are very fast requiring a very long level surface. A formula, based on the work of Sir Isaac Newton, as derived and tested extensively  by A. Douglas Brede, solves that problem. The formula is:

(where S↑ is speed up the slope and S↓ is speed down the slope on the same path).  This eliminates the effect of the slope and provides a true green speed even on severely sloped greens.

OK – so most people will have stopped reading, but if you’re a maths or physics geek you’ll want to find out more, so click here to read Arthur Weber’s paper, “Green Speed Physics”.