Do you know your distances?

“I hit my 7 iron 135 yards – all carry… no run today” one of my playing partners announced on Saturday, as she dutifully repaired her pitch mark on the fifth green.  Yes, her ball had travelled 135 yards in the air and landed within feet of the flag, yet again!  Do you know how far you hit with each club? This is particularly important when approaching the green as five yards can make the difference between a great shot and being in the bunker, however knowing how far you hit your driver can help you decide whether or not it’s safe to use it on dog-legs or holes with inviting fairway bunkers. Knowing how far you hit your clubs can save you numerous strokes over 18 holes.

With the proliferation of distance measuring devices it’s easier to measure your distances nowadays.  In the past you’d have to go to a driving range and try to estimate how far the balls were reaching by comparing them to the distance markers, however, now you can do some simple subtraction to work out your distances. Say you’re standing at the white markers on the first tee and your DMD tells you that you’re 477 from the centre of the green.  You fire your drive straight down the fairway and smile at your friends, who are applauding in admiration, as you stride confidently after your ball.  When you reach it, you glance at your DMD to see your distance to the pin and notice that it’s reading 207 yards.  So, you’ve gone from 477 to 207 yards – that means you’ve smashed your drive 270 yards.  (I would be lucky to hit it 170 yards!) 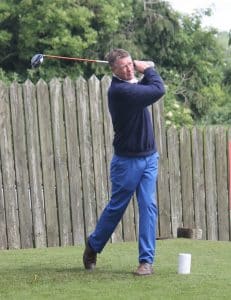 Apparently most club golfers over-estimate their distances.  I suppose I’m guilty of this because I don’t ever try to work out how far I’ve hit a poorly struck ball – I tend to remember how far my “best” shots have travelled, and I think most people are the same.  According to Golf Monthly a long drive for a man (amateur) is probably considered to be some 280-300 yards but in reality golfers aren’t getting anywhere near that figure.  Driving distance figures from the R&A and USGA’s most recent Distance Report show that the average hit by an amateur male club golfer is 215 yards.  Five handicaps and below average 240 yards, 6-12 handicaps average 220 yards, 13-20 handicaps average 204 yards and 21 and overs average 187 yards.

The Distance Report also looks at the female game and the numbers show that the average hit by a woman is 148 yards, with handicaps of 5 and under averaging 196 yards. 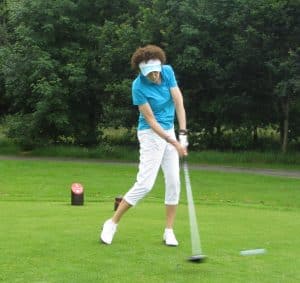 So, get measuring and remember to calculate the average for each club… don’t just remember your longest!  That should help you get your distances right on the course.  Now I just need to work on my direction!