Can you gain relief from sprinkler heads?

I was playing in an open at a neighbouring club last month, when one of my partners overshot the green and found her ball lying just behind a sprinkler head.  She took out her putter and then said, “Can I take relief from this sprinkler head as it’s in my line?”  One of the group said, “I don’t think so” and another said “I’m not sure”.  I was about to check the rules but the player in question said, “Sure, my score’s not going to win any prizes, so I’ll just play it as it lies but we’ll look it up when we get in.”

When we got into the clubhouse we were more concerned about renewing acquaintances and completely forgot the sprinkler head issue!  I did look up the Rules of Golf when I got home though.

Basically, the question is: “If a player has a sprinkler head between their ball and the line to the hole, do they get free relief? The ball isn’t on the green.”

The answer is “No, not normally, but some clubs have a local rule which allows it.”

Sprinkler heads are immovable obstructions, which are defined as an abnormal course condition in the Rules.

The rule carries on to say “If the abnormal course condition is close enough to distract the player but does not meet any of these requirements, there is no interference under this Rule.”  So in this situation, with the ball off the green, a sprinkler head on a player’s line of play isn’t interference and free relief would not usually be allowed.

Hold on – “I’m sure I’ve seen people take free relief from sprinkler heads before!” I hear you say.

As already stated elsewhere in the Rules, “When a ball lies anywhere other than on the putting green, an immovable obstruction on the player’s line of play is not, of itself, interference under Rule 16.1 Free relief is normally not allowed.”

The guidance advises that, “The Committee may limit such relief to certain situations, such as only for particular holes or obstructions, or only when the ball and the obstruction are in part of the general area cut to fairway height or less.”

Here’s an example of such a local rule: 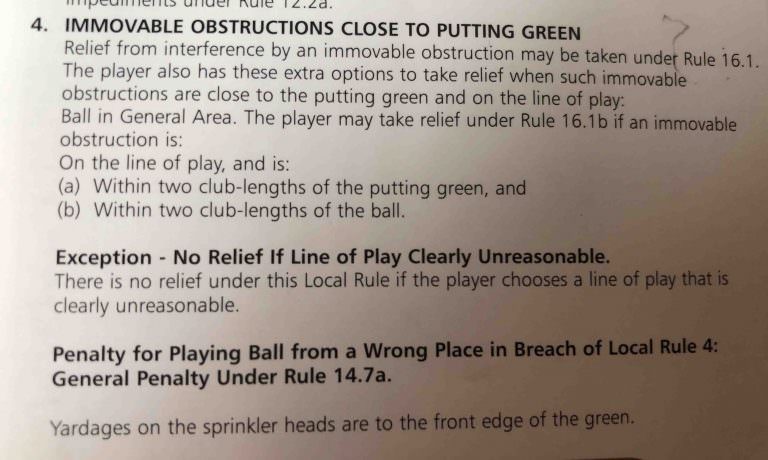 What about your home course – does it have a local rule like this?  What about Dungannon?  You’ll have to check the score card carefully.

If your own club has a local rule like this, that’s great, but make sure you’re very careful when you play elsewhere, in case they don’t!