Bryson’s Out of Bounds Query

Since the PGA Tour resumed in June, Bryson DeChambeau has been one of the most talked-about pros.  Firstly the 26 year old fitness freak made headlines for bulking up significantly  during the Coronavirus lockdown and then hitting absurdly long drives at nearly 200 mph and sometimes more than 400 yards!  Then he made the front pages for his top ten finishes and victory in the Rocket Mortgage Classic, however he has recently drawn attention to himself by arguing and being petulant!

Bryson made a 10 on the par 5 15th on Friday 17th July at the Memorial at Muirfield Village, Ohio.  Up until then he had been even par for the second round of the tournament, however his troubles began when he pulled his tee shot on the 15th off a tree and into a stream well left of the fairway.  He took a penalty drop and thrashed a fairway wood from 289 yards away.  It flew into someone’s back garden and rolled down a hill next to the fencing that lined the property. Then he reloaded and hit again, but this ball went well into the same garden.  His third attempt went in the same direction, but not just as far; it rolled beyond the buggy path and remained on the course.

When Bryson saw the first ball at the fence he reckoned that he had a chance of playing it, so he called for a rules official.  He was told that the ball was considered out of bounds because it was outside a line between the two fence posts by inches.  Bryson exclaimed, “I don’t believe it!  Can I get a second ruling, please?”    As the rules official called for back-up DeChambeau  was heard on the telecast saying, “They’re giving me a garbage ruling like usual.”

If you look closely you’ll notice that Bryson DeChambeau’s ball is lying right underneath the boundary fence and the ball appears to be inside the back of the railings. The Rules of Golf tell us that if a boundary is defined by a fence, the line of the course is determined by the inside of the boundary posts, not the railings. For a ball to be in bounds, part of it must cross the straight line that runs between one boundary post to next. If no part of the ball is crossing this line onto the course side, then the ball is considered out, which is why Bryson’s ball was considered to be Out of Bounds.   (Rule 18.3, and the Definitions of Boundary Objects and Out of Bounds.)

A ball is out of bounds only when all of it is outside the boundary edge of the course. The diagrams provide examples of when a ball is in bounds and out of bounds (taken from Golf Rules Guru). 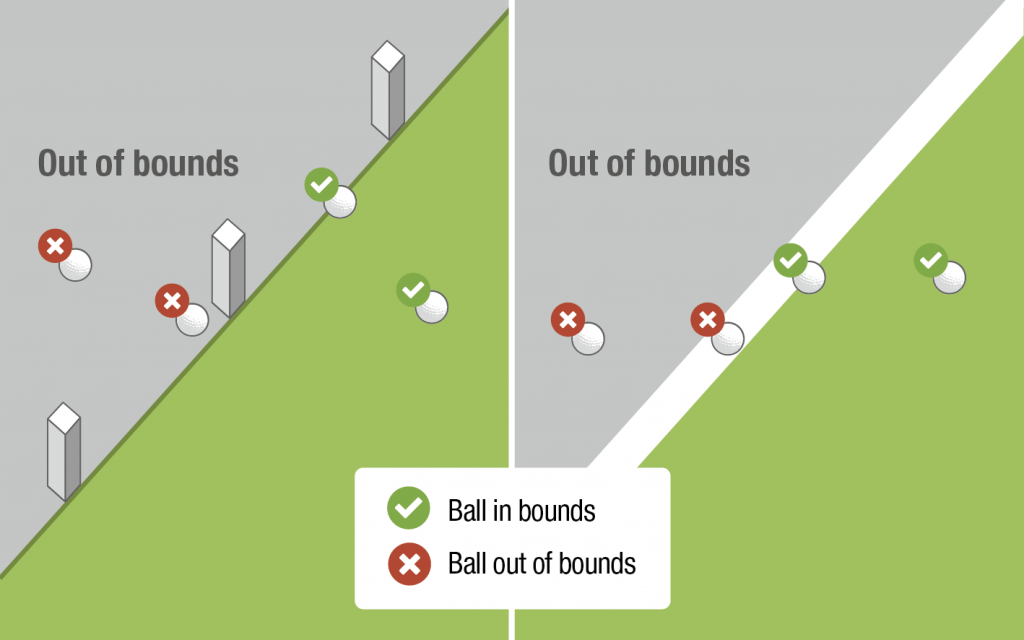 The second rules official, Ken Tackett, explained why the ball was considered to be out of bounds, after Bryson had told him “From my perspective, that would be technically still in.” Accepting the final ruling Bryson went on to make a 10 on this hole and subsequently missed the cut.

Another point to note: if a ball is in bounds, it is permissible within the Rules to stand out of bounds to play the stroke – so he could have “hopped over the fence” to play it. However, as the fence is a “boundary object” he would not be allowed to move it.

If you’re enjoy learning about the Rules of Golf and how they are interpreted you may be interested in The R&A’s Level 2 Rules Seminar and Exam, which is this year being offered as an online course by the GUI and ILGU.  The Seminar has been conducted in Ireland annually since 2014 by the GUI and ILGU by combining classroom and practical delivery, but in 2020 the Unions have sought to adapt to the realities of the COVID-19 pandemic and as a result have developed an online alternative, which is open to golfers at a cost of €20, a fraction of the standard in-person course fee.

The Level 2 programme is designed to build on and improve existing knowledge, looking at the Rules in more detail, particularly the more important playing Rules, e.g. Course Played as it is Found (Rule 8) and Relief Situations (Rules 15-19). This seminar also explores the role of the Committee in golf and golf competitions.

Students enrolling for the online course will have access to 10 video presentations, by referees from the ILGU and GUI, of varying length on the core topics of the Level 2 Seminar. The course page also contains a downloadable preparation guide to assist students in their study of the rules and preparation for the exam, as well as links to online resources and The R&A’s order page for a free copy of the Rules of Golf (p&p fees will apply).

The exam itself will be available via weblink on the course page and should only be attempted following completion of all of the study materials and videos. The exam can only be taken once, and must be completed by the end of October this year to successfully complete the 2020 Seminar.

All who enrol will be invited to attend a one-day practical session later in the year at a date and venue to be confirmed.

This Level 2 Rules Seminar is aimed at individuals with an involvement in tournament administration at any level of the game or a desire to have such an involvement, e.g. club managers, committee members, referees, club professionals.

The objective is to produce competent and confident individuals who are able to apply their knowledge, for example as part of a Committee running a competition.